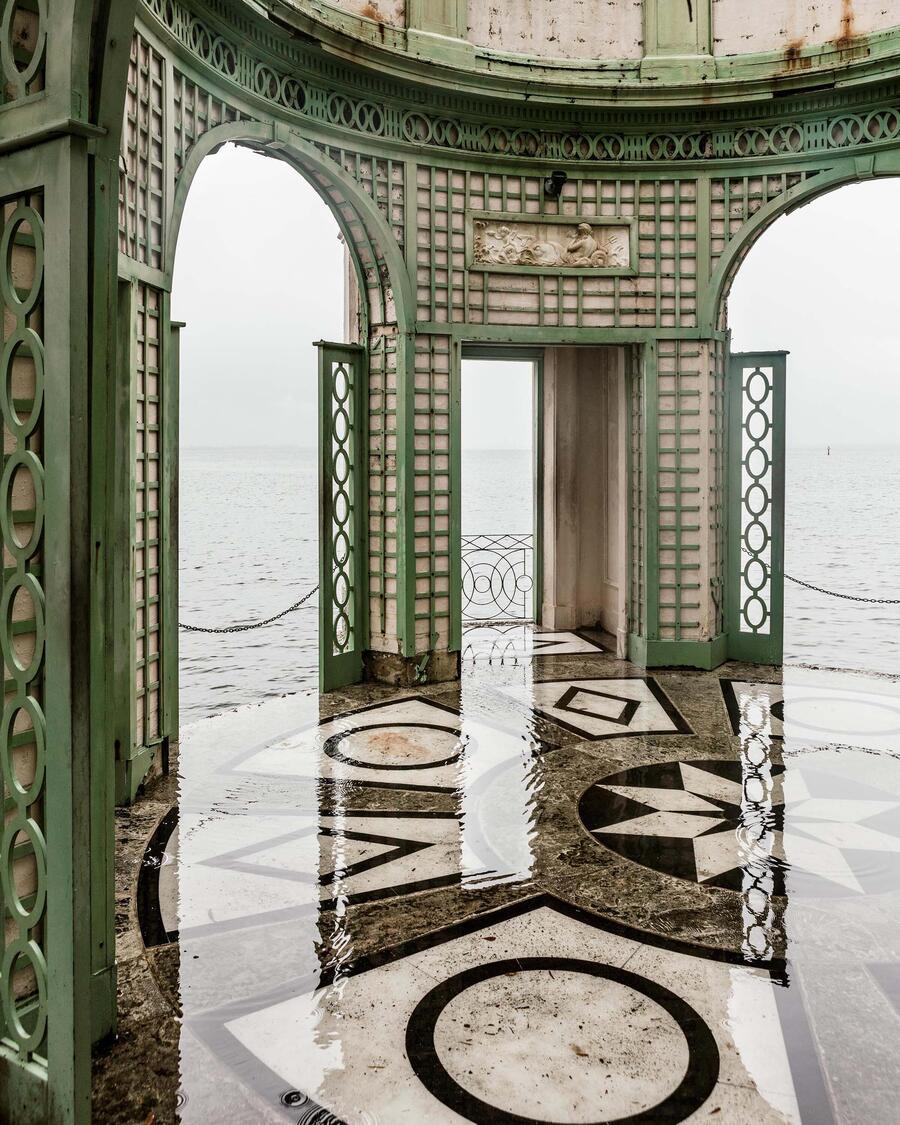 Anastasia Samoylova (b.1984. Moscow, Russia) is shortlisted for her exhibition FloodZone at the Multimedia Art Museum, Moscow (8 June – 28 July, 2021). FloodZone is an expansive and ongoing photographic series, exemplifying a virtuoso approach to image making and offering a personal response to environmental changes in America’s coastal cities, with a particular focus on Florida, where the artist has lived for the past seven years.

Begun in 2016, and with added momentum after hurricane Irma in 2017, Samoylova’s ongoing series of photographs reflects the vanity and precarity of everyday life in a cosmopolitan city founded on fever dreams and formed by images of touristic escape and luxury development.

Samoylova uses her own experience as a starting path for exploration, Samoylova’s image oscillates between fascination and announcement, heaven and disaster. But his record of the climate crisis, direct reportage of the lyrical revival. Samoylova uses a color palette that is tropical and pastel, but there is a danger too: decay, wear, and decay become evident beneath the glossy surface. Samoylova plays with the proliferation of aspirational lifestyle images that make up the official iconography of the region, but which stand in stark contrast to the encroaching reality of environmental catastrophe. From aerial views of landscaped landscapes to close-up observations of worn weather, architecture, neglected fauna and formidable flora, Samoylova captures the ‘seductive and destructive dissonance’ of a region firmly entrenched in her own image and bright allure, while are dangerously affected by sea level rise, storm surges and erosion, caused by climate change.

20 years ago I enrolled in the Environmental Design program at the Russian State University for the Humanities in Moscow. This program originates from Bauhaus and Constructivism, we create architectural models by hand and then photograph them for critique. Those early utilitarian images made me change the ability of photography to change the scale and our perception of space. Through years of researching various aspects of describing places and exploring different approaches to visualizing the complex layers that comprise the field of environmental studies, I came to documentary photography. Samoylova Focuses on the subject and pays little attention to aesthetics, a quality of photography that is tempting to initiate a dialogue with an audience that is wider than the average gallery visitor. Among other things, I am attracted to photography because of its democratic potential, its ability to go far and wide.

Throughout Miami’s streets and highways I found myself immersed in a kaleidoscopic world of idealised versions of the city depicted in a myriad of billboards, printed construction fences and ads. That year I also experienced my first hurricane with its alarming consequences.

What would you say the core themes of your work are?

Samoylova’s work explores how photography is used to illustrate the concepts of beauty and nature in contemporary visual culture by examining and creating typologies of natural landscape photography and human intervention. In 2013 I embarked on what would become a long-term project, Landscape Sublime, which challenges traditional depictions of landscapes in advertising and social media where popular taste algorithms have taken the notion of grandeur emerging in eighteenth-century Western art to the extreme. In response, I printed and assembled the source images into a three-dimensional installation that I re-photographed, with the final image somewhere between a true physical depiction and a computer-generated illusion. FloodZone uses the same way of responding to images of power in shaping understanding of the world, capturing Florida’s changing environment with photos that fuse into an acute perspective on life in a risky area amidst the forces that deny that risk. The recently published Floridas project also takes on the subject of unique natural and cultural forms that only occur in the sun-exposed states. These photos capture the temptations and disappointments of a place that epitomizes today’s contradictions in the United States, and build on images by photographers who have come before, especially Walker Evans. My latest project, Image Cities, takes a global view of post-industrial cities sharing the integration of photographic imagery and a constantly collapsing built environment. Moving through Moscow, Paris, New York, and London, among others, the project highlights shared aspects of the urban landscape of cities as well as their individual efforts to promote themselves through the realignment of certain aspects of their history. Overall, my work combines observational photography, studio practice, and installation, utilizing tools and strategies associated with digital media and commercial photography to explore the environment, consumerism and beauty.